Give through LIFESONG for our matching grant-7686

This morning I woke up in the middle of my bed with Jon squished up next to me.  This may have something to do with the absurdly low temperature we set our heat to because we are frugal, but I think it has more to do with the state of our relationship.

When we were dating and in the beginning of our marriage we had so little PDA that you would think we were really good sarcastic, flirty friends.  I just never wanted to be "that" couple.  Among our group of friends we were some of the first to date and to get married, so I never wanted for anyone to ever feel like a third wheel or excluded.  What can I say, we were just that nice.  We were also that cut off from our own desires to be close to each other, and for touch in general.  That sounds dirty when I say it like that, but you know what I mean.

Over the past year or so I really think we have grown tremendously.  We cuddle before we go to sleep.  *gasp*  I think Jon even kissed me at his mom's house the other day.  I know it sounds incredibly stupid, but for us it is good.  It is good to put each other first.  It is good to acknowledge that I don't one day want our children thinking we are stone cold, un-affectionate jerks.  While sarcasm and humor may be the foundation of our relationship, it is good to grow the other important aspects as well.

Over the past couple months I feel like we have been in a growth spurt to grow up and grow together.  Financial stress and some quick moves to try and buy a house will do that to you.  As will some family drama.

House buying is hard. At least for me.  I have moved every year for the past 8 years.  I like it and I am addicted to it much like I was addicted to NyQuil and Melatonin.  My ability to turn down a guaranteed good night of sleep is low, what can I say...nights does that to you.  I love the hunt for a new deal, and I honestly love the purging that comes with moving.  Cleaning up, new goals, new neighborhood, new decorating challenges, it's like crack to me.

So the thought of being stuck somewhere scares the crap out of me. What if our neighbors stink?  What if my lawn will only grow dead grass?  What if there is no where to throw goat fest?  What if my furnace explodes, I'm responsible for that crap now...

But we aren't supposed to live our lives focusing on the what if.  I am going through a book with my friend Amy about choosing Joy, and I am realizing how much I am missing out on.  I run through life really fast some sometimes finding joy is about going slow.  It's about cuddling with my husband in our frigid house.  It's about having an amazing time with your night shift friends, because your brain is only functioning at about 60%, so really anything is entertaining to talk about.  It's about taking in the moments with your family that are meaningful and deep, and letting go of the ones where they drive you nuts.  And it's about giving it up to God as we sign the contract on the house we really want this afternoon.  There is a good chance we won't get it, there are multiple offers in, and it is an awesome deal.  But I'm glad we found it.  I'm glad we are discovering together what we like and what we want for our family.  I'm glad we are doing it together and I'm going to chose joy even if the house gets away and even if we live in our frigid little house forever.  Because I have what really matters.

It might be frigid outside, but some lazy fool never took down her party lights from Goat Fest, so it looks pretty sweet out my back window.

Also, I love little girl pig tails.  While this peanut was distracted by Curious George, I might have quickly played hair stylist. 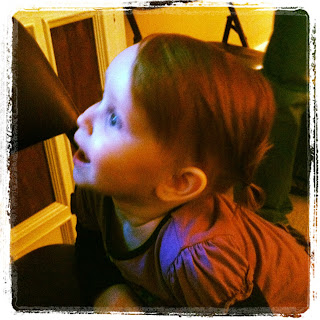 I'm off to try to nap before work tonight.  Hopefully I can sleep through the screaming children in the back yard.  We have a slight hill back there so whenever it snows we become sledding central.  These poor kids don't know what they are missing.  If it's not a struggle to climb up, it's not worth sledding down friends.

I'm in a blogging rut.

I need to clean my house, so I thought that procrastinating via blogging would help said rut.  No such luck.

Since I have nothing of substance to talk about, I thought I would go in the complete opposite direction. And just dump the pictures from my phone in the past week.

Exhibit A
I was peacefully siting on my couch minding my own business when this creeper scared the crap out of me. 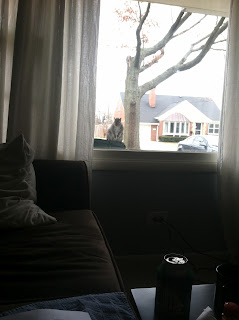 I am convinced we have too many squirrels in our neighborhood and that some may be demoned possessed.  They run up our screens in the summer and I fear they will ruin the garden I would like to have.  Little buggers. 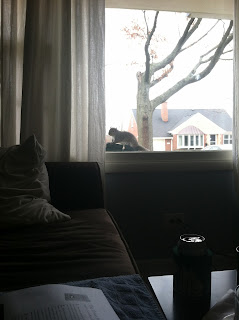 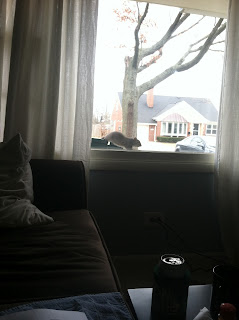 Exhibit B: I have been running with my sister lately.  The little girl she watches likes to text me from the itouch.  Read the conversation below.  Hilarious.  That kid cracks me up.  Maybe minions= squirrels 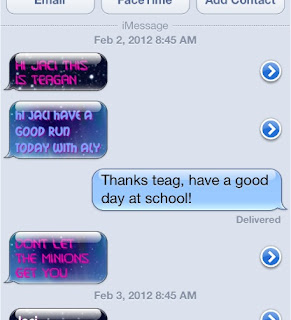 Exhibit C: When we were in Disney World, one of our favorite things to do is to find the hidden Mickeys.  Can you find it? 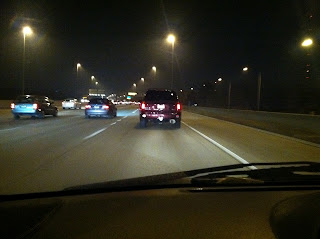 How about a little closer? 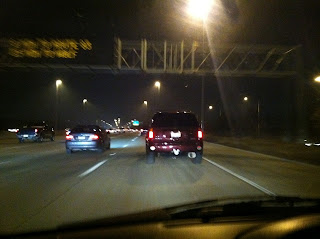 Sorry to have wasted five minutes of your day! Hope it gets better from here and no minions are out to get you.

On February 4th, Jon and I will have been together for 8 years (and married for 3).  Holy crap that is a long time considering I'm not that old.  We started dating when I was a senior in high school, and that sucker even came back for a prom repeat so that he could come as the wiser, cooler, college boy.  Only he was going to prom with a real  dork, so I'm guessing we didn't score any points in the cool department.  Oh well. 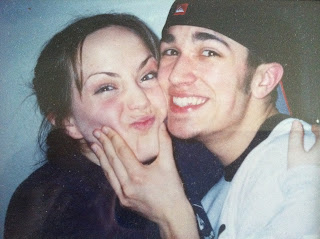 My first year of college was rough for us.  I ventured to Michigan and a friend of mine passed away.  Jon and I had only been dating for a year and he had no clue what to do with this emotional hot mess he called his girl friend.  I was already struggling with being far from everything and everyone I loved, and the loss of my friend was enough to push me over the edge.  We weren't really close anymore, but she was someone I looked up to, and now she was gone, and I felt alone.  It sucked.  In that same year my young cousin passed away and my dad's best friend committed suicide.  I was reeling to say the least, but Jon stepped up.  He stepped up as a leader in my life and he held onto hope when I thought it was lost.  It was that year that I realized the fragility of life and the richness that is there, if you chose it.  It was also that Christmas that he gave me a gift that let me know  we could make it for the long haul.

Without my knowledge he contacted everyone I had known from Jr. High on.  Family, friends, teachers, everyone.  And he explained that I was having a rough year and could use some truth spoken into my life.  People wrote letters and cards of what I meant to them, and he put them all together in a book for me, followed by a letter from him.  Blew my world away.  Even in my depressed, miserable state, I still mattered, my life mattered.

In the years to come, we grew up together.  I was able to support him through the unexpected loss of his cousin, and he now understood the place I was coming from in the beginning of our relationship.  We were able to spend a year of college both in the city, and it was awesome being able to trek up and down the red line to see each other.  That was probably when we were at our coolest.  It has been all downhill since then. We both thought the other was slightly crazy when they decided to go back to grad school so soon, and yet we did it together.

I wouldn't call our dating life easy, but it was good, deep, and rich.  We continued to choose God and each other through the ups and the downs. It set the foundation and tone for our marriage.  When we got engaged I would have strangers asking me how old I was.  My response would always be, "I will be 23 when I get married."  They didn't have to know I would only be 23 for a whopping month.  I was always so afraid of people judging us being so young...because I like to live a decade in advance.  But even when I got engaged at the age of  22 (by one day), I knew.  I knew he was the one for me.  I knew we could continue to chose each other through the ups and downs.  I knew it wasn't going to be easy, but it was going to be awesome. 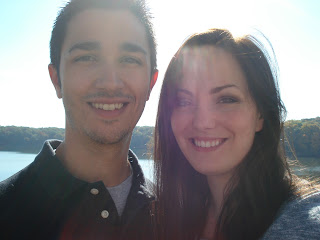 I didn't know how awesome it was going to be.  I didn't know that he would step up as the leader in our marriage, and then some.  I didn't know  we would learn to fight, and that it would be good for us.  I didn't know how long and how much money it would take to pay off student loans. I didn't imagine we could do something like GoatFest. I didn't realize what a great father he would be some day.  I didn't know he would go from Johnny to Jon and with a name change would come a new level of confidence that is so attractive I could jump him when he walks through the door.  T.M.I? Sorry.  I still miss Johnny, but I'm so glad I ended up with Jon.

I'm so glad I didn't know, that life continues to surprise me, and that God's blessings can far exceed my wildest expectations.  We have some things on our plate that will make this year a bit wild and crazy, with some ups and downs, but there is no one else I would rather ride this roller coaster with.  And to tell you the truth, I like the butterflies in my stomach when we go down the steep hills.  I know that we will come back up at some point, but the butterflies remind me that I am alive, and the we are living life to it's fullest, and we are doing it together. Diving in and going deep.  We are all in. In our marriage, in our lives, in our faith, with our friends and family. I can't wait for the next 8 years with this guy. With my guy. 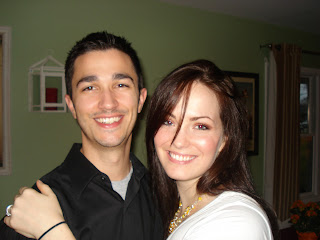 For your listening pleasure, I included our song eight years ago.  And our song for our first dance.  Like I said. Dorks. 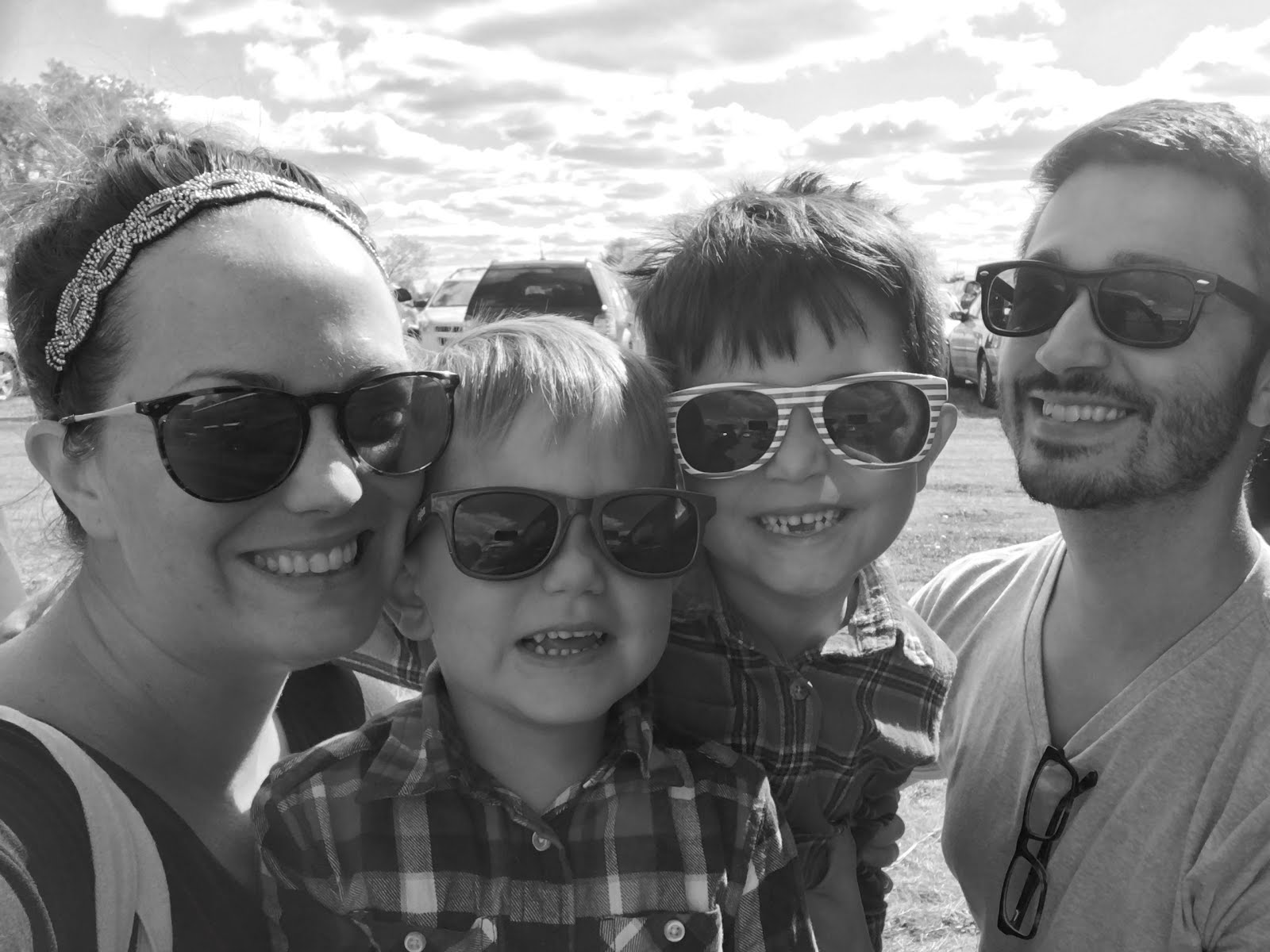 Hi! We are the Noto family and we are adopting from South Korea. Join us.